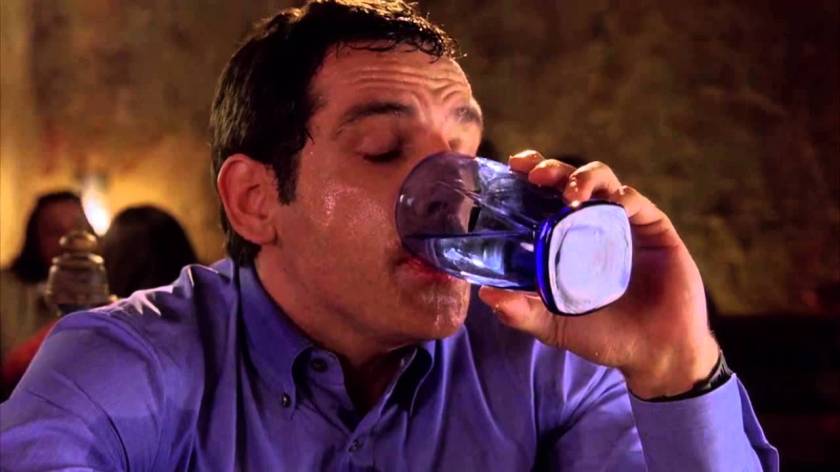 You feel that vibe?  That was me, and I’m sure a lot of you yesterday in what seemed like a wall of heat shit made up from the ever forgiving New York City air.

Both on my way to work and during the commute home I was soaked head to toe. Multiple trains and zero air conditioners.  I was 100% sure that heat stroke was inevitable.  Live shot of me …

During the commute into work the biggest culprit was the NYC Subway by far, especially if we’re talking temperature.  It had to be over 100 degrees down there.  And as you all are well aware, there isn’t an ounce of air conditioning on those platforms.  The only thing you can hope for is to be blessed by the Commuter gods and be given an arrival time of 4 minutes or less for your connecting train.  For me, on this day, I wasn’t blessed, but instead cursed.  15 minutes that felt like 2 days.  As I stood there helpless next to a woman with 10 different colors in her hair wearing elf shoes, I could begin to feel a trickle of sweat from my neck begin to lodge itself between all the pores that exist on my back.  Thankfully, I splurged at Target and bought high end undershirts that subdued this.  Party in the front, gross, sweaty and disgusting disaster in the back.

Now that I think about, maybe the multi colored hair girl with the elf shoes was merely a mirage.  A complication from heat exhaustion.  An illusion if you will.  Until we meet again.

Anyway, the entire day was spent within the confines of my office walls, basking in the ambiance of free air conditioning that’s actually not free because I work for a living.  I earn this AC.  It was glorious.  We ordered lunch in.  We ate like Kings and Queens as we crushed excel spreadsheets and media math by our desks.  We were dry.  We were happy. First world type shit.

As the day drew closer to its end I knew that I had no choice but to enter the thunder dome outside.  The heat had grown stronger, like a bacteria that feeds off the souls of miserable 9-5ers.  I tried my best to only walk on the sides of street with shade cover from our glorious New York City buildings.  Even so, the heat still did its thing.  I was still sweating my balls off and I had yet to hit the subway.

Upon entering the subway I came across an empty cart as it rolled directly in front of me like Cinderella’s carriage on that fateful night.  The cart was empty, which meant one of two things: homeless person or it’s fucking hot in there.  The answer was the latter, which left me with a conundrum of sorts.

Do you stay in the hot train car or go into the air conditioned car that’s packed with no room.  Keep in mind this was a local train, so I had to deal with starts, stops, exits and entries.  Space vs. Air.  You decide.

I chose to sweat my ass off.  It was more of a decision based off my pure exhaustion than my desire to not have my balls stick to my thigh.  As it turned out, this decision wouldn’t even matter, because little did I know what awaited me at Track 1 via the Northeast Corridor Line.

In Penn Station,  I people watched to see who spent their time wisely. As I always say, never stay in the middle of that concourse.  The percentage for you getting the track correct isn’t worth the risk vs reward.  My advice is to secure a beverage, either pure or of the alcoholic variety.

When my track was called I was lucky enough that the majority of people heading there were extremely out of shape.  They’ve clearly killed time by crushing Auntie Anne’s during their many waits at Penn.  I out maneuvered and out ran them to the track by a commuter mile.  It was quite easy.  I patted my self on the back, feeling the ever so slight ricochet of my palm and the sweat elevating off my back. Still … victory was mine.

Or so I thought.

As I entered each train car, searching for the best spot to sit, a trend was developing.  No air-conditioning yet again.  I made the call to just take a seat and concentrate on my breathing and conserve what was left of my vitamin water zero, orange edition.  I’ve watched enough movies to know what the human body needs to survive for up to 2 days.  A favorite of mine is “127 Hours” with James Franco, where he portrays a mountain climber that had to drink his own piss and eventually cut off his own arm to free himself and survive the hazardous conditions he found himself in when a boulder came crashing down on his arm.  Now, I wasn’t about to drink my own piss, but cut off an arm to get the fuck off this train?  Sounds reasonable and a small price to pay.  Wife just needs to open my ketchup bottle for the rest of her life.  Remember babe, in sickness AND in health.

Moving along and stop by stop passengers boarded.  All sighing, all complaining and rightfully so.  They had thought they’d be greeted with cool air, but got more of the same. Heat upon heat, upon heat.  One woman standing in a vestibule even proclaimed that “I AIN’T FUCKIN’ PAYIN’ THEM, NAH NAH!, THIS IS INHUMANE”.

I don’t disagree with her.  She had a point and was thinking what we all were thinking. Thoughts and prayers to her husband when she gets home. I’m sure she’ll be a delight.

Finally, I was one stop away.  The guy who I was sandwiched next to in my seat was passed out.  He may have flat-lined a few times. I don’t know CPR though, so I just continued at failing to refresh Instagram since the internet was trash.  RIP my data.  I prayed that when the time came for my stop, that he’d rise from the dead and let me off. Or maybe he was simply playing possum the whole time, faking sleep to avoid having to pay his fee.  If the latter is true, I tip my hat to you, good sir.

And now, at last, my final stop!  I was now completely soaked and had finished my vitamin water. I squished my way off the train Platform and was met with the same wall of humidity I had grown accustom to, however this humidity was different.  It was freedom.

Me: Ugh, I’m soaked.  That train was so fucking hot.

Wife: Really?  I was on one of the first cars.  AC was fine and I even finished my book.  It was so good, it was about this woman whose husband is caught …