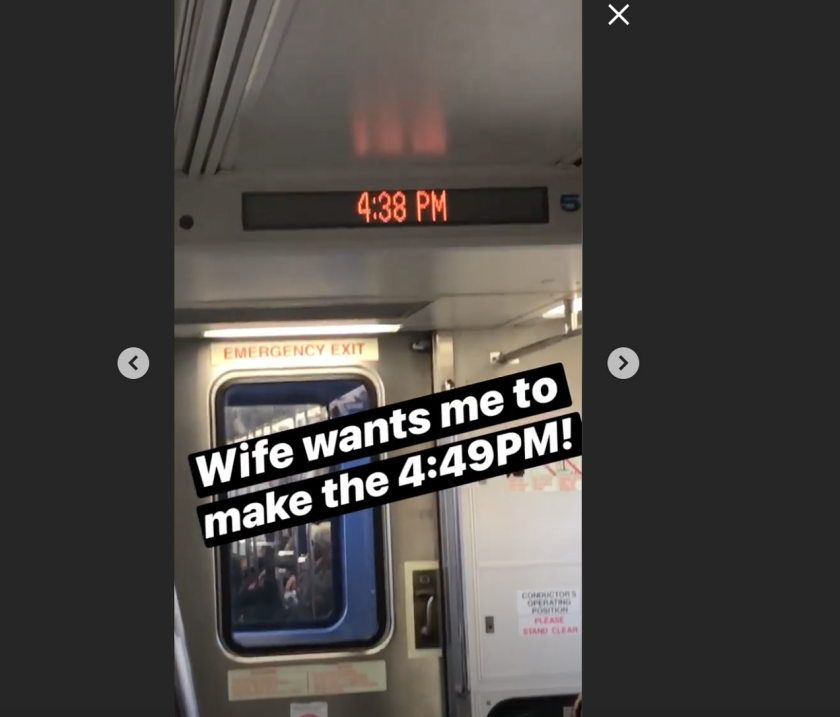 Over the past few weeks I’ve had to adapt to this new commute in every way possible.  I’ve adjusted my schedule at every turn – I’ve gotten up earlier,  gone to bed earlier and even tested out the timing ever so perfectly so I’d know how long it would take me to drive to the train station, park my car and walk over to the train 5 minutes before it arrives.  So far, so good.

However, the one piece of this never ending puzzle that I have not mastered yet is how to avoid a delay and beat the machine at its own game.  I feel like an operative at this point, making strategic moves with pin point accuracy to avoid the horror that awaits me if I hesitate even one moment.  This past week, I was put to the test, as were thousands of commuters.  Unfortunately for them, they weren’t so lucky.   Here’s how I did it …

Earlier in the day I had planned to leave work a bit early to take care of some errands at home that were time sensitive.  I was locked and loaded for the 5:01PM Train out of Penn Station.  The day was going on without a hitch, but then a weird feeling came upon me at 3:45PM … my stomach started to turn and I started to get the chills.   It was as if a fever had broke without notice.  I thought to myself, what could this be?

It was my Commuter Sense.

Something had gone terribly wrong.  As I checked my phone rapidly, I noticed that @NJTRANSIT was tweeting about 30 minute delays out of Penn Station …

BUT IT’S NOT EVEN RUSH HOUR YET YOU FUCKS!!!!

After this alert I sat at my desk and contemplated my next move.  “30 minute delays? … ehhh, maybe it’ll pass.”

Shortly after that moronic rationale another alert hit my phone.  It was now 45 MINUTE DELAYS IN AND OUT OF PENN STATION!  From there I knew what I had to do, which was get the fuck outta there ASAP.  As I approached my team they knew something was wrong.  I told them there were 45 minute delays in and out of Penn and that I’d have to leave even earlier than planned.  They looked at me with their big impressionable eyes and I could tell immediately that they didn’t give a flying shit.  I don’t blame them.  They’re in their mid-20s, living in the New York City, probably single with no one busting their balls and will be at Happy Hour in 2 hours having the time of their lives.  If anything, they’re probably saying to themselves “I hope I never end up like Nick when I’m in my 30s.”  Trust me, you will, Peter Pan.

From there I darted out of the office ahead of schedule.  Again, my wife advised me to take the PATH Train, which we all know how that ended up the last time.  I was scared, I was alone and I had to brace myself for either a smooth sailing commute or a multi-hour trip of disappointment and regret.  As I took to the street I grabbed my phone to send out my version of the bat signal to all 120+ people that follow me on Instagram.  (cough, follow me if you read this, cough)

As I ran toward the PATH, I was accosted by homeless people asking me for money to which I completely blew right by even though I always make it a point to throw them a dollar.  I did however yell back that “I’ll get you next time“.  I meant it.  It’s also important to note that I only had $20s in my wallet.  I mean, you get it … $20 bucks?  That’s a little steep, no?

After getting over my guilt of being a terrible and cheap human being I proceeded to the PATH Train.  To my shock it was pretty empty … a little toooooo empty.   I couldn’t believe it, so I stayed on the Platform eagerly waiting for the next train to arrive.  I needed the Journal Square train or as my wife explained “It’s the train with JSQ on it” like I’m a fucking idiot.  As if I don’t know the different between a train that says Hoboken and JSQ.  Yet another shot to the ego for ya boy!  First guilt from a random homeless person, now embarrassment from the one who loves me most.

Seconds were passing by and I could see other people heading to the Platform.  The word was out and I was fucked.  I was about to be bombarded with other hopeless souls on this journey of misery.  I was convinced that the next train that arrived would be “Hoboken”, not be confused with “JSQ”, and that it would be packed, thus foreshadowing the rest of the day …. HOWEVER, I was wrong, THANK YOU, SWEET BABY JESUS! … The train was rather empty and it was JOURNAL MOTHER FUCKIN’ SQUARE.  I damn neared cried.  I got on the train and thanked a stranger.

From there I took the train directly the Journal Square without a hitch!  I arrived, rejoiced and then transferred to the next train heading to Newark Penn Station.  I hit that train right on time … or I so I thought.   As I came above ground my wife had informed me that she was ALREADY at Newark Penn and specifically wanted the 4:49PM Train.

It was 4:38PM and I hadn’t even hit the Harrison stop yet.  Panic began to ensue.  I wasn’t worried about getting home late at this point, but rather, disappointing my 7 month pregnant wife.  If you think commuting is bad, try explaining that she’ll have to either a) wait at the train station for me because I have the car keys or b) Uber home.  I had to make this train.

Once I got off the stop I had about 6 minutes to spare.  I remember being told that once you get off at Newark Penn that you need to run to the exit to beat the mob.   AND RUN I DID!  As soon as those doors opened I left every middle aged woman in the dust.  If you were a guy who was slightly out of shape, you were staring at my ass as you lugged your oversized backpack over your shoulder.  These people, beat down from years of New Jersey Transit and veterans of the commuting game were no match for my fresh legs and juking ability.  These were City legs, well rested from over a decade of convenient commuting.  My moves looked straight out of a video game …

As I darted down the stares of Newark Penn I got the heads up that it was TRACK 4.  So I get to the bottom and there is NO TRACK 4.  I can’t find this spot worth a damn.  And keep in mind, at this point I have about 4 minutes to spare or its the end games for me.  I ask a Police Officer and he tells me the elevator is around the corner … I get there and there’s a line down the block.  Nope, not gonna work.  More panic.  I then call my wife like a loser.  She berates me for 1 minute because she “can’t do everything all the time!!“.  She’s right, but to my defense, I had no time and this was only my second time being in this portion of Newark Penn and the last time I was here is literally looked like a zoo.   Anyway, Happy Wife, Happy Life!  I apologized, so she came and got me like I’m her child.  More berating ensued.  I apologized again and again.  I even thought about saying “Ya know, you could have just waiting downstairs for me…”, but I declined.  I figured my best course of action was to strategically pivot and ask her “how was your day?” and if she “wanted me to pick up anything tonight when we get home“.

This worked.  I think.  We then boarded the train and even got seats.   We sat next to a guy who actually talked to us the entire way home.  My wife seemed to enjoy the conversation, which completely made her forget about the fact that she was mad at me only 10 or so minutes earlier.

We then arrived at Rahway.  Got our car and left.  We beat New Jersey Transit and narrowly avoided disaster … for one day.  And I mean that literally because look at all the fun we missed …

Friday commute home and have to deal with another delays from @NJTRANSIT . What’s the excuse now?!? Us commuters are fed up with this BS, it’s the same thing time after time. @FuckNjTransit #NJTransit #njtransitsucks pic.twitter.com/gj7zKl5irP